Trump Train, pulling out of the station! Next stop, the White House!

Trump is powerful, sure. We all know this. But what might be most telling is polling actual people. Most polls are of a small sample size. You might get 1000-2000 people at most in these polls. When a site like the Drudge Report polls real people on something and the response is as overwhelmingly in favor of one person or view, you take notice. 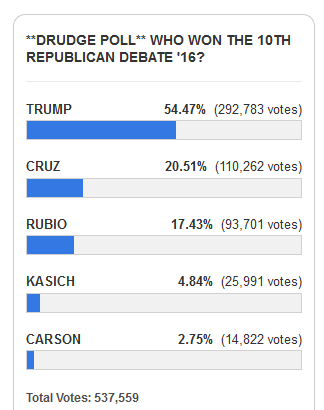 This is a screen shot of the poll numbers as of 11:42am this morning, February 26th, 2016. Those numbers are absolutely staggering and adds fuel to the fire that though Trump may poll much closer to the other candidates prior to primaries, he absolutely crushes them in actual numbers.

The GOP thinking that someone other than Trump will be the nominee at this point is pure fantasy. The people are speaking. It’s time to take notice.