We’re usually not ones to usually buy into theories like this, but holy crap this is really close to being Hillary, and when you read into the details, it gets even more clear and convincing.

Apparently Hillary has a lookalike and the resemblance is uncanny. Here’s a side by side of the two.

The woman’s name is Teresa Barnwell and she’s a Hillary Clinton impersonator. Yesterday Hillary had a potential seizure or energy loss episode after she visited the 9/11 memorial. You can see the footage right here.

After this episode, people were claiming to have seen a body double outside Chelsea Clinton’s NYC apartment, Barnwell took to twitter to squash those rumors.

I'm in Los Angeles today. Not in NYC! 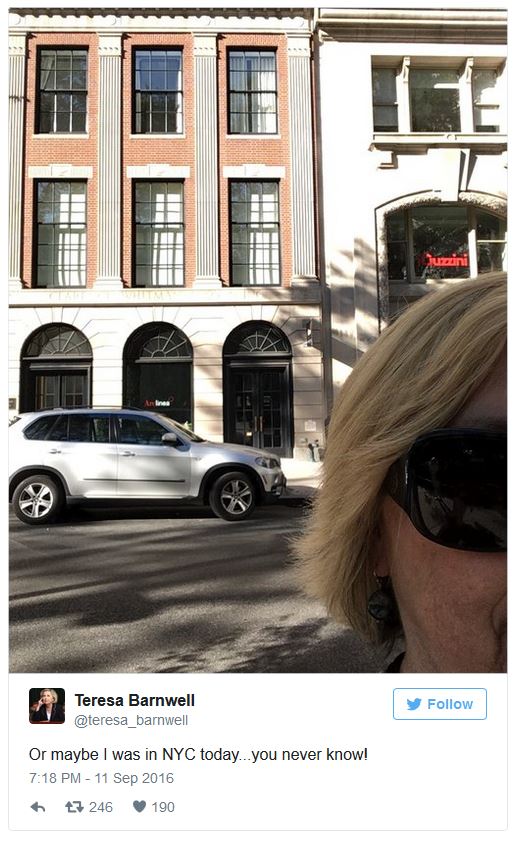 And here’s a before and after of Clinton pre- and post-episode.

Here’s a close up from outside Chelsea’s apartment.

And another pre- and post-episode. The top is at the 9/11 memorial and the bottom is after emerging from the apartment.

The most damning evidence might be a close up of her ear pre- and post-episode. Note the different ear shape and earrings.

While we’re not 100% convinced that Hillary’s body double was on hand yesterday, but the deleted tweet, the close up comparisons, and the strange behavior of Clinton before emerging from Chelsea’s apartment is very strange at the least.

It wouldn’t be the first time that a political figure used a body double to be in two places at once, or make appearances when ill. This is absolutely not something the Hillary campaign needs right now, so it’s our job to spread it around as much as possible.

What do you think? Is Hillary just trying to dupe the American people once again? Do you think she’s hiding a serious disease? Does she really just have pneumonia?