Alright, everyone – this is the best news I’ve heard all month.

The liberal media machine has finally gone off the rails, after a long time of it teetering on the point of no return.

According to new reports, Hillary Clinton snapped at Obama when he investigated her email scandal as a matter of national security. Apparently they were supposed to keep it all under wraps, but he had other plans.

The NY Post reports the exchange, as chronicled in a newly-released book, Unlikeable: The Problem with Hillary, 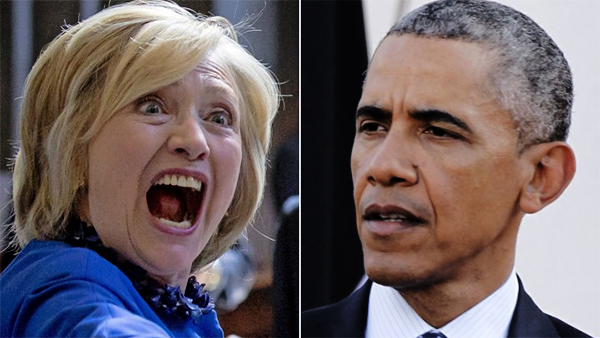 Clinton requested a meeting with Obama, against the advice of hubby Bill Clinton, believing “she was being persecuted for minor, meaningless violations,” author Edward Klein writes.

Clinton initially took a friendly approach during the meeting and Obama reacted as if he didn’t know what she was talking about, the book claims.

“He was almost being deliberately dense,” a Clinton source said. “It really angered her.”

Clinton lost her temper and called the president by his first name in an emotionally driven break with White House decorum, according to the book.

“What I want for you to do is call off your f–king dogs, Barack!” Clinton allegedly barked at Obama, according to Klein’s account, which cited sources close to Clinton and Obama senior adviser Valerie Jarrett.

The president was so stunned by Clinton’s disrespectful demands, he needed a moment to compose himself, the book claims.

Obama then responded, “There is nothing I can do for you one way or another. Things have been set in motion, and I can’t and won’t interfere. Your problems are, frankly, of your own making. If you had been honest . . .”

Of course, the Clinton administration wouldn’t admit to any of this, but we know the truth – that she got caught red handed and didn’t want to take accountability for one of her countless scandals. I can’t wait until all liberals are out of the White House.