ISIS reported in their online magazine earlier today that not only were they responsible for the downed Russian passenger jet, earlier this month on the Sinai peninsula, but they posted the bomb that did it.

If ever there was evil in the world, this would be its definition. I pray for those that were affected, and I wish that anyone wishing harm upon free people of the world meets his end quickly. 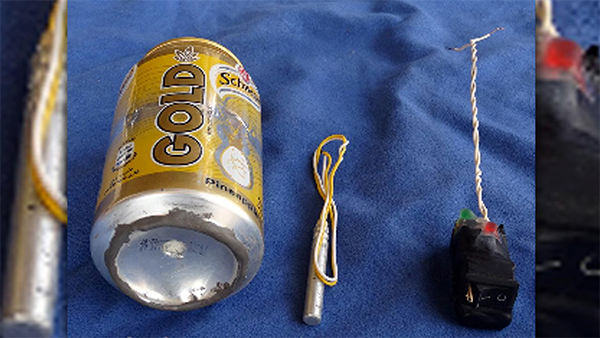 The photograph shows a soft drink can and two components that appear to be a detonator and a switch, explosives expert Anthony May said.

There is a hole in the bottom of the can, which reveals a white substance inside that could be explosives, he said. The detonator would be placed through the hole, he said.

The three components appeared to constitute a “suicide-type bomb” because the bomber would have to flip the single-throw rocker switch to detonate the bomb, May said.

May acknowledged the apparent simplicity and lethality of the bomb.

“It doesn’t take much to bring down a plane in flight if it’s placed in the most critical area of the aircraft, breaking the fuselage,” said May, a retired explosives enforcement officer with the Bureau of Alcohol, Tobacco, Firearms and Explosives.

Because the can is made of metal, “any typical security protocol should detect this via the metal detectors or via the x-rays” in an airport, May said.

“However, it’s not unlikely or impossible to separate these components, and an individual carry a separate component through security and then assemble the device on the other side,” May said.

May also cited another, “most likely” scenario for moving such a bomb through an airport: “An insider threat getting this item, circumventing security, getting it to the aircraft — if it was used on the aircraft,” May said.

The downing of the Russian airliner was done in retaliation for Russia’s airstrikes in Syria, ISIS claimed in the magazine.

In fact, ISIS had initially planned to “bring down” a plane belonging to a country in the U.S.-led coalition fighting ISIS, the terror group said in the magazine.

Russia’s Metrojet Flight 9268 crashed on October 31 after departing from the Egyptian resort of Sharm el-Sheikh for the Russian city of St. Petersburg, killing all 224 people on board.

“After having discovered a way to compromise the security at the Sharm el-Sheikh International Airport and resolving to bring down a plane belonging to a nation in the American-led Western coalition against the Islamic State, the target was changed to a Russian plane. A bomb was smuggled onto the airplane, leading to the deaths of 219 Russians and five other crusaders only a month after Russia’s thoughtless decision,” the ISIS magazine said.

In the publication, ISIS said Russia’s airstrikes in Syria were “a rash decision of arrogance.” ISIS also said the photographed soda can and other components were the “IED used to bring down the Russian airliner.”

These monsters need to be taken out swiftly, without any more innocent life lost. Who’s with me?