We can’t make this up.

Google, the ubiquitous search engine, is now promoting the controversial claim that ethnic minorities cannot be racist against white people. No, this is not a joke.

According to The Sun,

America is currently locked in a passionate argument about whether some supporters of groups like Black Lives Matter are actually racist towards white people, with people from different sides of the political spectrum offering varying views.

However, Google’s search facility offers a rather one-sided solution to this thorny and divisive question.

It is not clear whether this is conscious decision from Google, or whether it is a result of the algorithms it uses to compile search results.

We searched Google using several terms similar to the phrase: “Can you be racist towards white people?”

Google showed us an explanation which appears to be taken from the Huffington Post.

“Any person can be racist, regardless of their own race,” Google’s search rankings explained.

“WRONG no they can’t racism requires power and prejudice. white people have power to oppress black people because they control the system and ecnomic [sic.] structure in society.” 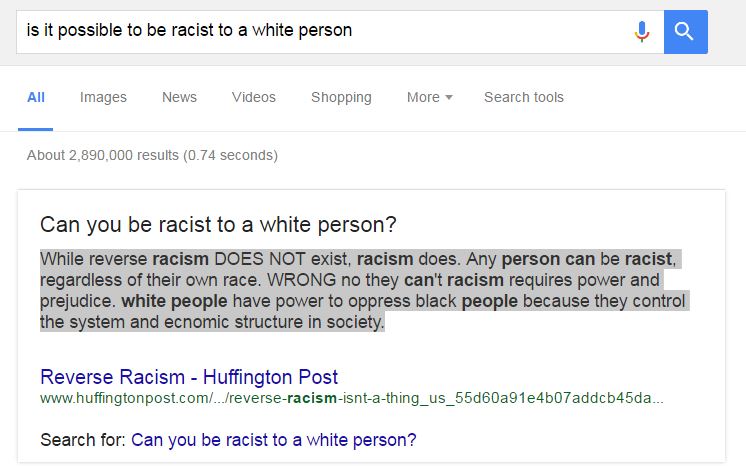 We also asked if a black person be racist against a white person and were told: “The usage of the word racist relative to a hate speech by blacks on blacks or whites is incorrect. A subjugated group cannot be racist – they can only be prejudicial.”

When we asked Google the question “can you be racist towards a white person?” it showed a comment from a blogger called Slapdash Mom.

She wrote: “Prejudice against white folks is not ‘racism’, it’s ‘prejudice’ or ‘discrimination’.