Good news everyone! There’s going to be another GOP debate next week, and Trump will be at the center of it all again.

Our favorite GOP front runner will take on all comers again in a GOP debate, this time held on, surprisingly, liberal news outlet CNBC on October 28th, 2015. The list is formidable, but nothing that Trump can’t handle. Donald Trump, Ben Carson, Marco Rubio, Carly Fiorina, Jeb Bush, Ted Cruz, Mike Huckabee, John Kasich, Chris Christie, and Rand Paul will all be there to tackle many key issues. 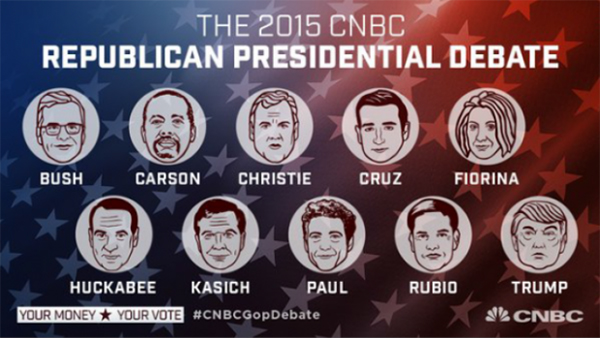 Trump will be the headliner with Ben Carson a close second, but we could see two or three more candidates drop out with Chris Christe and Rand Paul specifically polling under 3%. Without strong debates, they’ll be gone and there will be less competition for Trump!

We’ll be watching, will you?