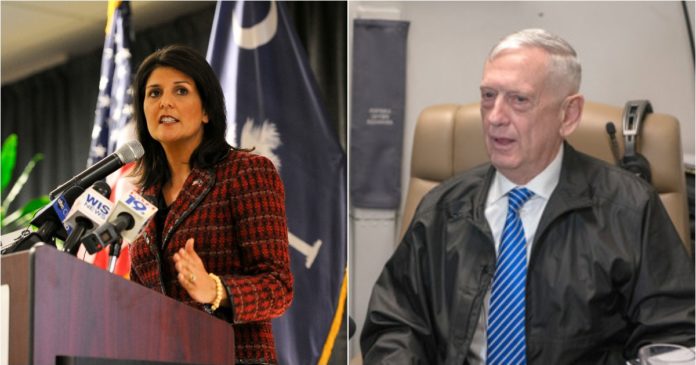 Defense Secretary Jim Mattis and United Nations Ambassador Nikki Haley don’t see eye to eye on Syria. If their opinions remain disparate, it could cause serious trouble for the Trump administration.

A horrific chemical attack ravaged a Syrian city Saturday. 60 people were killed. Haley believes that she has all the proof she needs about the attack while Mattis was careful to note that he’s still looking for evidence.

“We definitely have enough proof, but now we just have to be thoughtful in our action,” Haley said. “The national security team is trying to give him [President Trump] as many options as we can, and we’ll be thoughtful about it and see what happens.”

Mattis, meanwhile, said: “I believe there was a chemical attack and we are looking for the actual evidence… As each day goes by — as you know, it is a non-persistent gas — so it becomes more and more difficult to confirm it.”

Mattis’ measured words aren’t surprising. Russia, which has close ties to Syria’s Bashir al Assad, insists that the chemical attack was a stunt organized by the rebels. Relations between the U.S. and Russia are delicate, Mattis may be trying to temper the stronger words coming from other members of the administration.

Haley is known for her frankness. Videos and eyewitness accounts from journalists and survivors who were on the scene are hard to discount. She’s not willing to mince words and pretend that there’s a chance something horrible didn’t occur.

President Trump was deeply affected by the attack.

“Now we have to make some further decisions. So they’ll be made fairly soon.”

Prior to Saturday’s attack, Trump indicated that he wanted to take American troops out of Syria. It’s not clear what his plan will be going forward.