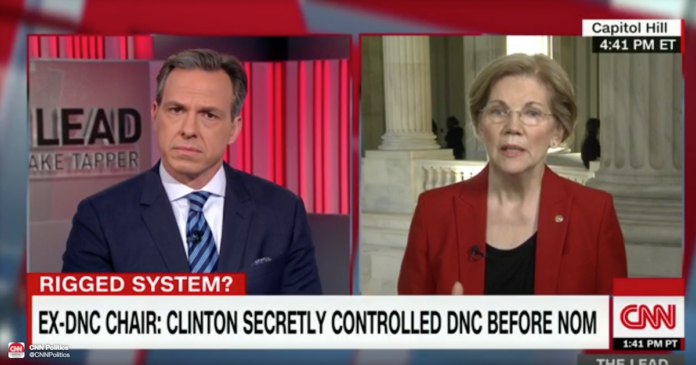 There’s no shortage of clowns in the Democratic Party these days, as it’s looking a lot more like a circus than an entity that promotes policies that improve America. Instead of doing their jobs and trying to improve the nation, they’re busy fabricating scandals to get Trump kicked out of office.

It’s par for the course, really, as they’ll use anything to undermine Trump while hiding their own party’s disgraceful behavior. Speaking of disgraceful behavior, the left-wing media has done a fantastic job at feigning ignorance and downplaying the fact that the DNC rigged it’s own primary election, something that should have every liberal up in arms. But apparently, since Queen Hillary ultimately won, it seems nothing’s going to be done about it. So confident are Democrats that nobody will hold them to account for their anti-democratic actions, they’re now admitting their election was rigged from the start.

As reported at the Hill, during an interview with CNN’s Jake Tapper, Elizabeth “Lies A Lot” Warren admitted that her party rigged the presidential primary in favor of Hillary Clinton.

When asked by Tapper if she believed the Democratic primary was rigged in favor of Clinton, Warren replied with a simple “Yes.”

Tapper was talking to Warren about the former DNC chairwoman Donna Brazile’s new book, which is supposedly an honest, insider account of what happened during the last election cycle.

In the book, Brazile claims she found evidence that Clinton’s campaign rigged the nomination process in her favor. Which begs the question, why didn’t she do anything to stop it? Easy, because that’s the outcome she wanted in the first place and likely complicit in the charade as well.

Brazile says in the book that she was told to investigate Clinton after the DNC’s hacked emails revealed clear evidence of collusion. She then found an agreement between the DNC, Clinton campaign, and joint fundraising committee that said the campaign would “control the party’s finances, strategy and all the money it raised.” This backroom deal was signed in August 2015, an entire year before the Democratic nominee was decided.

Warren told Tapper that she thinks these allegations are a “real problem” and hopes that Tom Perez, the new leader of the DNC circus, will bring the party together.

“When…Tom Perez was first elected chair of the DNC, the very first conversation I had with him [was] to say, you have got to put together a Democratic party in which everybody can have confidence that the party is working for Democrats, rather than Democrats are working for the party,” Warren said. “And he’s being tested now.”

Brazile blasted the agreement in her book, saying it “was not illegal, but it sure looked unethical. This was not a criminal act, but as I saw it, it compromised the party’s integrity,” Brazile wrote. Then why didn’t you do anything about it, Donna? Why didn’t you say anything about it at the time?

Brazile should look into doing standup, because that joke about Democrats and integrity/ethics is a doozy. Just as big of a joke is Warren’s faux-concern over the whole ordeal. It appears she doesn’t even care, as all she wants is for the party to comes together in be more like Bernie Sanders on policy.

If you really wanted a party that people could be confident in, there’d be a massive witch-hunt to reveal and drive out the folks involved in the rigging. But that’s not going to happen, as it would make the Democratic Party look bad, which is the one they don’t tolerate. They’ll tolerate or sweep under the rug any crimes or indiscretions committed by fellow comrades to maintain their “image,” and it appears that once again image trumps honesty in the case of their election rigging.