Donald Trump may be big and loud in his delivery, but no one can say he’s not fair when it comes to his competition. Trump consistently calls out underhanded tactics of the people running against him, all the while not attacking first. While some liberals want to make the case that Trump is mean, I’m not sure how one can be a better sport.

That’s why it comes as such a surprise that Donald Trump made the claim that Ted Cruz’s campaign is up to its old tricks, trying to cheat and trick people into voting for him in South Carolina – the same tactics used by Cruz in Iowa, depicting Carson as backing out of the race, when that wasn’t the case. 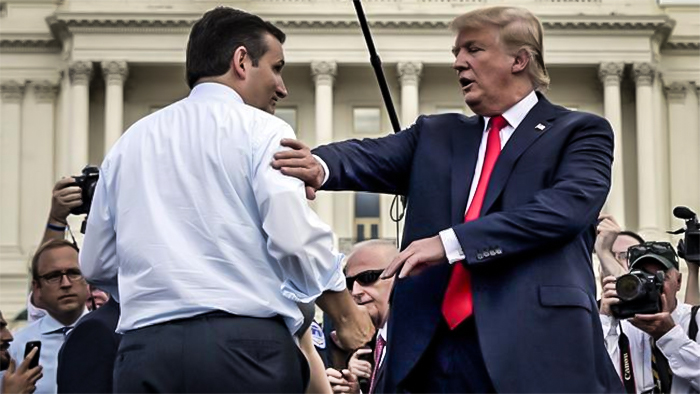 Donald Trump has a new line of attack against Ted Cruz — he’s a liar.

Over the past 24 hours, Trump has tweeted five times in some variation that the Texas senator is not truthful.

It all started Thursday morning with a tweet from the billionaire that Cruz was making negative robo-polls. Cruz flat-out denied the allegations Thursday to reporters before a rally in Fort Mill, South Carolina.

“We are getting reports from many voters that the Cruz people are back to doing very sleazy and dishonest ‘pushpolls’ on me. We are watching!” Trump tweeted.

But Trump was not swayed.

We are getting reports from many voters that the Cruz people are back to doing very sleazy and dishonest "pushpolls" on me. We are watching!

Trump’s reference to Carson is about an incident in Iowa where members of the Cruz camp told caucus-goers that retired neurosurgeon Ben Carson had dropped out of the race and that they should throw their support behind Cruz.

While Cruz has apologized to Carson, he has repeatedly said the source of the information was a CNN report. CNN has strongly objected to the idea it said Carson was bowing out of the race. Following a second-place finish in Iowa, Trump took on the issue, saying that it could have cost both Carson and himself higher placements.

On Friday morning Trump continued to bash Cruz, bringing up the fact that Cruz had attempted to associate him and Rubio with gay marriage.

Lying Cruz put out a statement, “Trump & Rubio are w/Obama on gay marriage." Cruz is the worst liar, crazy or very dishonest. Perhaps all 3?

How can Ted Cruz be an Evangelical Christian when he lies so much and is so dishonest?

I’m glad that Trump is calling out these lies and underhanded tactics. He’s right – it’s not Christian, and it’s not what we need in a leader. Cruz wants to say anything he can to win, and we need a leader to do the right thing, not to simply want power. I can’t wait until Trump demolishes Cruz!