I just don’t know how our parents and grandparents kept up with the news before social media came along. I mean, how did they get their up to the moment updates on the every emotion of their favorite politicians?

The Real Donald Trump kicks things off with this, not at all baiting tweet about his former opponent, Hillary Rhodam Clinton:

Crooked Hillary Clinton now blames everybody but herself, refuses to say she was a terrible candidate. Hits Facebook & even Dems & DNC.

As IRL, President Trump had some supporters:

She's like a crazy woman who got dumped, but then keeps coming to the dude's work with a big butcher knife "to talk" about what happened.

Apparently, once you start debating Donald Trump, it’s difficult to stop, because we’re six months into his presidency and Hillary still can’t let comments like this go by:

She, of course, has her loyal followers as well:

It’s Donald Jr. to the rescue (the hilarious, and much-deserved rescue).

What house is he in again??? That's what I thought. You're trying too hard. https://t.co/9Yomz1Emb5

I think what Don Jr. is trying to say is that a miss is as good as a mile, and Hillary missed becoming President. She can throw all the shade she wants, but that shade is still going to come from somewhere that’s not 1600 Pennsylvania Ave. 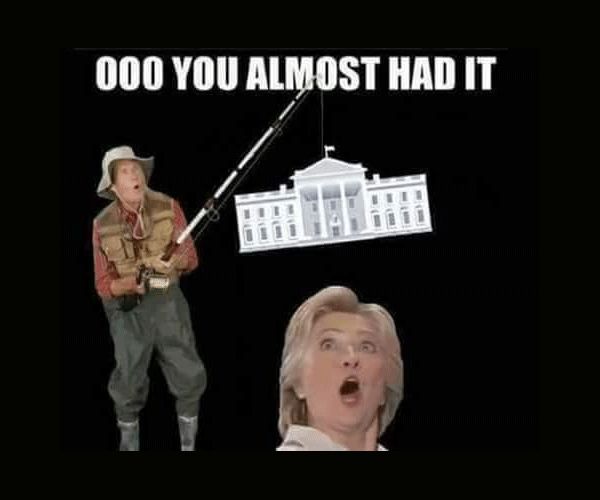