The Presidential election at the end of 2016 was too close to call.

Neither Hillary Clinton nor Donald Trump had enough votes to win.

There was much talk about ballot recounting, court challenges, etc., but a week-long ice fishing competition seemed the sportsmanlike way to settle things.

The candidate that caught the most fish at the end of the week would win the election.

After much of back and forth discussion, it was decided that the contest would take place on a remote frozen lake in northern Wisconsin.

There were to be no observers present, and both candidates were to be sent out separately on this isolated lake and return at 5 P.M. with their catch for counting and verification by a team of neutral parties.

At the end of the first day, Donald Trump returned to the starting line and he had 10 fish.

Soon, Hillary returned and had no fish.

Well, everyone assumed she was just having a bad day or something and hopefully, she would catch up the next day.

At the end of the 2nd day, Trump came in with 20 fish and Clinton came in again with none.

That evening, the democrats got together secretly and said, “I think that Donald Trump is a low-life, cheatin’ son-of-a-gun. Tomorrow, don’t bother fishing. Just spy on him and see just how he is cheating.’

The next night (after Trump returns with 50 fish), the democrats got together for the report of how the republicans were cheating.

Clinton said, “You are not going to believe this, he’s cutting holes in the ice!” 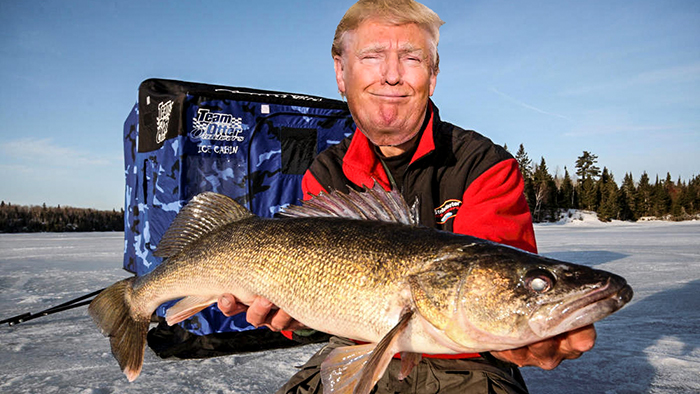