CNN is getting sloppy. The fake news purveyor, perhaps because their credibility has already been assailed, has become so desperate that they’re trying to pass off cheap stunts as real events.

Eagle-eyed viewers spotted a discrepancy in reporter Drew Griffin’s Hurricane Harvey coverage. CNN aired a video of Griffin yammering to the camera before suddenly noticing a truck right behind him is being swept away by flood waters.

“Brave” Griffin leaps into action. He sprints towards the truck and manages to pull its stunned driver to safety. Oh my goodness, Griffin is a hero! He saved a life!

Not so fast. The video shows Griffin wearing a pair of khakis when he first notices the truck, but by the time he’s yanking the driver to safety he’s clad in dark pants and thick boots. The “emergency” apparently wasn’t urgent enough for Griffin to forgo changing his clothes.

“It wasn’t much of a desperate emergency if CNN’s Drew Griffin had time to change from a pair of shorts and sandals into a pair of long pants and boots?” writes the Conservative Treehouse blog. 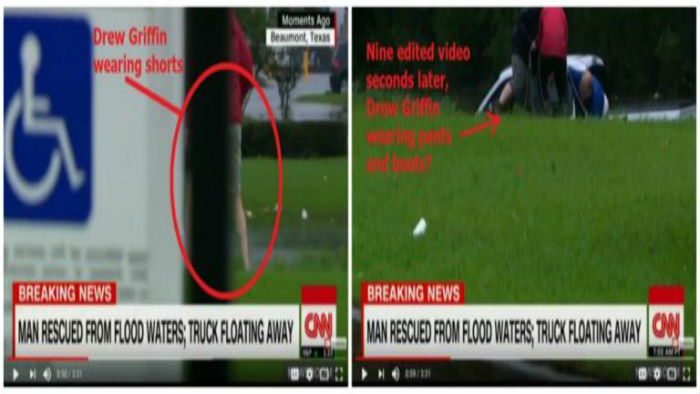 We live in the time of Trump. CNN’s antics worked while Democrats had a strangle hold on the White House, but we have a new commander-in- chief now. Networks that traffic in false information will be called out.

Maybe CNN staged the entire rescue, maybe they only edited the video to make it seem more daring and urgent than it really was. Who cares? The point is CNN once again aired a bogus story.