Wow! This is huge and I can’t believe she did this!

Kim Davis came to fame, and some would say infamy, when she refused to issue same sex marriages last year. Because of this, she was thrown in prison. We think unlawfully. However, she just won a major victory in the fight against Christians all over America.

Christians are constantly becoming a silent majority voice in the media and in general conversation, but this should shut up all the haters once and for all! 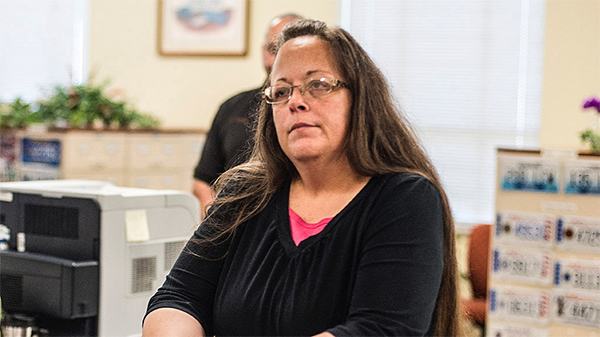 When Davis, a Rowan County Clerk, refused to issue same-sex marriage licenses in 2015, she was jailed. Davis cited her religious beliefs but still wound up behind bars and publicly persecuted for her decision.

She was only released after others in her office began issuing same-sex marriage licenses.

Now the state of Kentucky has written into law a new format for marriage licenses for the state that protects the rights of Christians and their beliefs.

The way the new bill works is it changes marriage licenses so that they do not require the county clerk’s name and it allows those seeking marriage to check whether they are bride, groom or spouse.

Bevin said of the bill: “We now have a single form that accommodates all concerns. Everyone benefits from this common sense legislation. There is no additional cost or work required by our county clerks. They are now able to fully follow the law without being forced to compromise their religious liberty.”

FINALLY! A win for Christianity among all talk about Muslim and Islamic integration into American society. This needs to be shared with every American to show that Christians have rights too and we shouldn’t become second class citizens!