It’s said that a lie can travel halfway around the world before the truth can get its pants on, and a few of the major news networks have been leaning heavily on that idea. Finally though, propaganda central (aka CNN) may have gotten the push it needed to either change its lying ways or slither off into obscurity.

The media giant suffered a terrible hit earlier this week after an undercover reporter got one of their lead producers on tape, admitting that they were pushing the Russia story based on ratings alone, and not based on facts.

Due to that fun interview, and also no doubt due to the general lack of concern with fact finding and general left-leaning bias, the media giant’s viewership has plummeted. Big time. 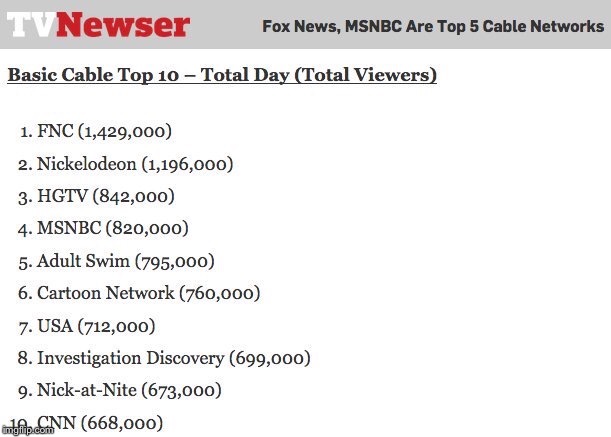 When you’re getting beat out by Investigation Discovery, I think it’s time to reevaluate your life. HGTV and Cartoon Network I get; those have a pretty solid fan base. Nick-at-nite even makes sense if you think about all the exhausted parents who are too tired to even turn the thing off after the kids are in bed (which is the only reason it’s ever on at my house) but some of those channels are just an embarrassment.

We hope it’s a death spiral, considering all of the intentional harm that they’ve done in attempting to sway the minds of Americans who don’t have access to direct information on what is going on. We know that there will be some bias, that’s built into the human brain, but the direct manipulation of people in an attempt to incite hysteria and make money; that’s just a dirty and underhanded way to do business.

In case you don’t remember what all the fuss is about, here’s the video of the damaging admonition in question:

I would feel sorry for them, but this is kind of what happens when you make stuff up, and try to overthrow presidential administrations just because you don’t like them and it will make you money.

It’s this simple; tell the truth, or someone will tell it for you.