On August 9, 2014, racism in America got a huge shot in the arm when in Ferguson, Missouri, a police officer fatally shot an 18-year-old black man. Loss of life, any life, is tragic, and should never be taken lightly. It should certainly never be used as a prop to push a political agenda, but that is what has happened.

Following the shooting, there were riots and investigations and so much he said/she said that most of America was left thoroughly confused. To make matters worse, a “documentary” film has now been made about the incident and apparently there has been some serious creative editing going on.

This new spin on the case has caused rioting to commence again at the store where the shooting took place, and an attorney for the owner wants to set the record straight.

The documentary claims that Brown didn’t rob the store, that he bartered for drugs. The owners denied that, and have released video in order to prove it.

CNN is promoting this fake documentary, “Stranger Fruit“, that uses heavily edited footage of an earlier Mike Brown visit to the store. According to the documentary Mike Brown was exchanging marijuana for store product at 1:13am the night (early morning) prior to his return and strong arm robbery of the same store. The footage is edited to give the appearance of store employees accepting weed as barter for product. This is false.

Secondarily, the producer of the video, Jason Pollock, is claiming the police never released the earlier in the day CCTV footage and instead tried to hide it. Again, this is false. Both the Grand Jury and the FBI were given -and reviewed- all of the CCTV footage including footage from the 1:13am visit. However, CNN is promoting the falsehoods by the documentary producers in an effort to stir trouble.

This includes the full surveillance video for the incident.

The unfortunate truth is that people will believe whatever they want to believe. Those looking for racism everywhere will probably find it. And so much the better if they’ve got a news outlet backing them up.

As the saying goes, “Figures don’t lie, but liars can figure.” We are being fed a bill of goods and expected to just swallow it, because someone packaged it up and pre-digested it for us. This is unacceptable, and cannot be tolerated.

The next time you see a video clip, and you wonder about its authenticity, remember, it’s all about the angles: 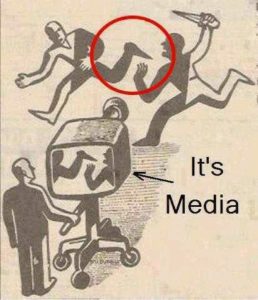