Unless you’ve been hiding under a rock, you’ve probably noticed the controversy surround the monuments who pay tribute to Confederate soldiers and anyone who owned slaves. Considering the huge chunk of American history that this would banish from public view, there are a lot of people against the removal of these statues.

Unfortunately, as often times happens, the nay-sayers are by far the loudest voice, and they’re making some headway. Their cause did get set back just a little by one of their own, trying to help. Chelsea Clinton took to Twitter to throw in her two cents, and it was just as brilliant and well thought-out as most of the youngest Clinton’s social media interactions.

Chelsea Clinton, Hillary Clinton’s daughter, decided to weigh in on the controversy surrounding the re-emergence of Confederate statues as a political debate and compared those remembered in the statues to “Lucifer.”

She posted the message on her social media account Thursday. “The story of Lucifer—who rebelled against God—is part of many Christians’ traditions,” she said. “I’ve never been in a church with a Lucifer statue.”

The story of Lucifer-who rebelled against God-is part of many Christians' traditions. I've never been in a church with a Lucifer statue.

Clinton was apparently trying to associate Lucifer’s rebellion with that of the rebel Confederates in an attempt to show why Confederate statues should not be allowed to remain.

The twitterverse has a few things to say on these comments. At least one of her avid followers had to correct her, even though he’s obviously crushing hard.

Wait most of the cathedrals in New York have at least one depiction of Lucifer. Just saying your brilliant though

The rest I agree with, but “brilliant”?? Meh.

There were a few not so flattering comments from those who don’t think that a Clinton should be commenting on religion at all.

Haven't been in a lot of churches, huh?

prob not but I'm sure you would have tried to coerce Mary into aborting since she was a low income unwed mother. https://t.co/5p4tNjgxlV

But you left church when you were 6 because you supported abortion, remember? https://t.co/uNKP979Zly

Some were concerned that Chelsea shouldn’t even be venturing into churches at all.

But you left church when you were 6 because you supported abortion, remember? https://t.co/uNKP979Zly

I guess as it turns out, even a Clinton can be wrong at 6. Given, you probably don’t find them admiring it, but it does happen.

No need for a statue. You nursed gasoline from her teat as a wee bairn. https://t.co/u8rwB3vHhB

The gasoline thing seems right, but what are the chances that Hillary nursed? That seems extremely womanly for the matron of pants suits. And after all, she’s all about equality, and since men can’t nurse, I’m sure she wouldn’t ever do anything to promote inequality . . .

And last but not least, people decided to ask the experts. 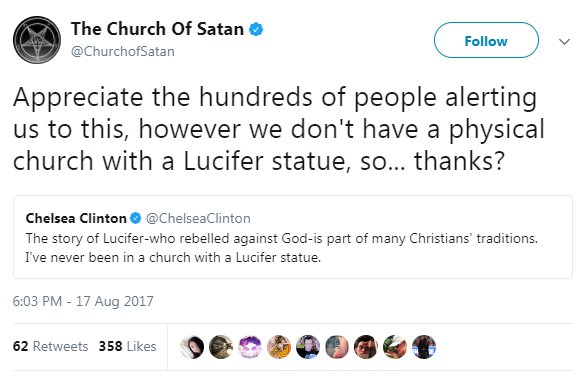 There you have it; that’s the rise and fall of Chelsea Clinton’s latest and greatest bright idea. Maybe her PR people should advise her to stay off Twitter, it doesn’t seem to be helping her image, especially when she pretends to be an expert on Satan.