The Iran Deal was one of the worst dealings with unhinged world leaders in American history, and at every point, the Iranian government works hard to make an example of Americans.

Today in the Persian Gulf, the Iranian military captured and detained ten American military personnel because they got too close to their ship, and said – get this – that both the Iranian ship AND the American ship were experiencing mechanical problems and drifted towards each other. That sounds like complete and utter BS to anyone with ears, especially when you look at the track record of Iran’s military actions towards America.

Foxtrot Alpha has the story, 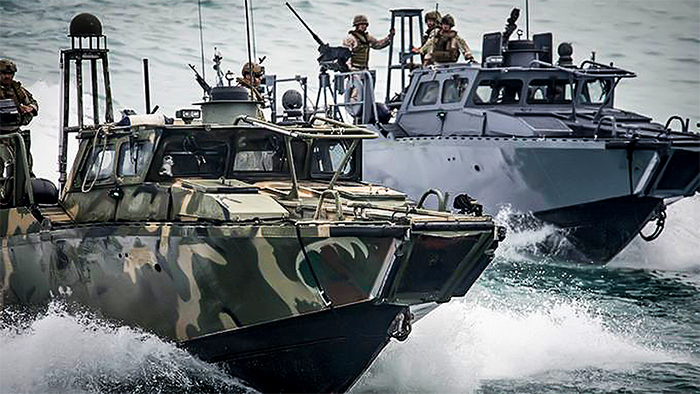 The boats were moving between Kuwait and Bahrain when the boats experienced mechanical problems and began drifing toward the Iranian held island. As a result they were taken into custody by the Iranian Revolutionary Guard.

Apparently the U.S. has contacted the Iranians and they have stated that the sailors will be allowed to continue their journey “promptly.”

The Navy says the boats were on training mission and we do not know the exact type of craft involved, although a variety of U.S. Navy small boats are used in Persian Gulf. These include the Small Unit Riverine Craft pictured below and Riverine Command Boats shown at the top of this post.

“… the boats had illegally traveled more than a mile into Iranian territorial waters near Farsi Island, in the Persian Gulf. It said that forces of the Islamic Revolutionary Guards Navy had confiscated GPS equipment, which would “prove that the American ships where ‘snooping’ around in Iranian waters.”

UPDATE: 3:03PM PST- CNN Pentagon corespondent Barbara Star reports that nine male sailors and one female sailor are being held and they will not be released until morning.

Something smells fishy here, and it’s not the Navy boats. This is a clear act of aggression by Iran, especially after they fired rockets near an American aircraft carrier recently as a show of force. I don’t know what they’re trying to pull, but when Obama is out of office and we get a President that isn’t afraid of putting them in their place, you can bet that these “incidents” will stop entirely.

We will keep you updated on this story as it unfolds.