The city of Alexandria Virginia was woken up to gun shots this morning just shortly after 7 AM. The shooting took place at a park where there was a baseball practice with several high-ranking lawmakers in attendance.

WRCBTV reports that the House Majority Whip, Steve Scalise was one of at least two shot. He is reported to be in stable condition after taking a round to the hip. Republican Mo Brooks was also hit as well as several on-site law enforcement officials.

A gunman opened fire Wednesday morning on a baseball practice at a park in Alexandria involving Republican members of Congress, injuring several people including at least one lawmaker, Steve Scalise, the majority whip, according to police and a congressman.

Alexandria police would only confirm that a shooting at Eugene Simpson Stadium Parkhad occurred and that one person was in custody.

Rep. Peter King (R-N.Y.), in an interview with The Washington Post, confirmed early details. King said Capitol Police confirmed the account to him.

Rep. Devin Nunes (R-Calif.) told The Post that Capitol Police officers walked into the congressional gym around 7:30 a.m. Wednesday and told members about the shooting and said Scalise had been shot.

Scalise, from Louisiana, is the third-highest ranking House Republican and has a round-the-clock Capitol Police detail. 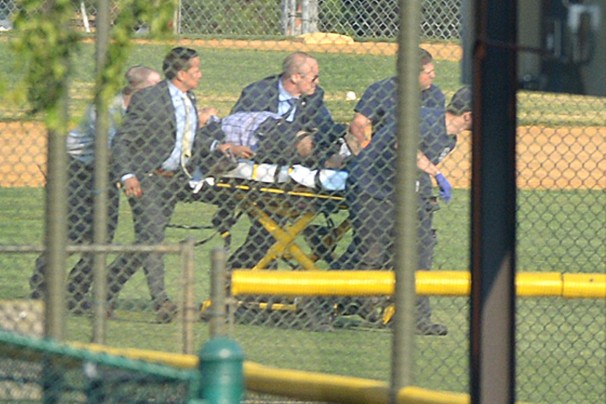 Police were alerted to the shooting just after 7 am local time and were on the scene within minutes. The security that accompanied law makers were also said to be invaluable in this exchange. There’ve been at least 5 injured that have been taken to hospitals in the area, but those details have been kept under wraps for the time being.

This was an update released from the Alexandria Police Department about the suspect:

UPDATE: Suspect is in custody and not a threat. PIO will be onscene shortly to share updates.

(Washington Post) President Trump issued this statement: “The vice president and I are aware of the shooting incident in Virginia and are monitoring developments closely. We are deeply saddened by this tragedy. Our thoughts and prayers are with the members of Congress, their staffs, Capitol Police, first responders, and all others affected.”