Breaking news out of France today – We have confirmed reports about French authorities raiding a suspected terrorist stronghold where many terrorists were hiding. These terrorists were connected with the bombings last week in Paris.

A woman wearing a suicide vest detonated herself outside of an apartment where police suspected the mastermind behind the attacks was staying. Police then raided the apartment and arrested 5, while killing another.

They said one man was also killed and five people arrested in the standoff, which began before dawn and continued more than five hours later. One person remained inside the apartment, but it wasn’t clear who.

A senior police official said he believed Abdelhamid Abaaoud, a Belgian Islamic State militant, was inside the apartment in the Paris suburb of Saint-Denis with five other heavily armed people when the raid started.

The official, who was not authorized to be publicly named according to police rules but is informed routinely about the operation, said scores of police stormed the building and were met with unexpectedly violent resistance. 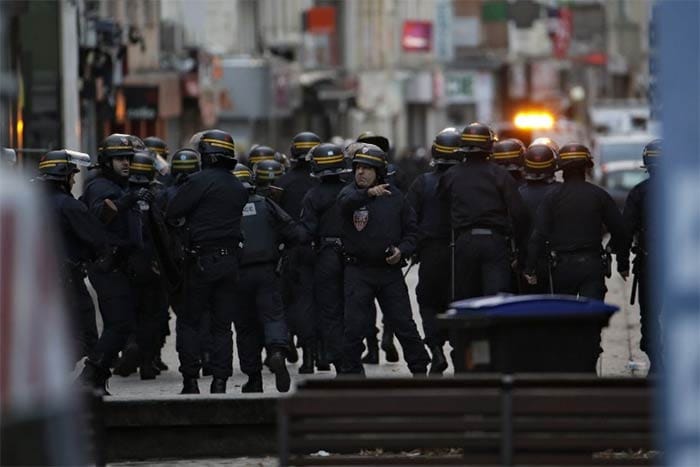 ‘There was a big explosion. Then two more explosions. There was an hour of gunfire,’ said Baptiste Marie, a 26-year-old independent journalist who lives in the neighborhood. Another witness, Amine Guizani, said he heard the sound of grenades and automatic gunfire. ‘They were shooting for an hour. Nonstop. There were grenades. It was going, stopping. Kalashnikovs. Starting again,’ Guizani said.

It was unclear if Abaaoud was the one killed or if he was one of the 5 arrested. France is clearly taking no chances and aggressively trying to rid themselves of the Islamist menaces that caused this horrific attack on Paris.

More news on this as we get it.