Many times we take our political and ideological differences so seriously that we forget what we’re fighting for. We’re supposed to be fighting for the right, for the ethical treatment of all people, and for preserving the rights that will give us a sustainable society for generations to come. Yes, our ideology about how to achieve that is sometimes drastically different than those we might meet in a day, but treating them like trash will only broaden the divide and make us more unlikely to effectively communicate.

Many of us never felt more mentally separated from our friends and families on the other side of the political aisle than directly following the election and inauguration of President Trump. That was the feeling that one waitress in Washinton D.C. had, until her experience with some Republicans in town to support the new President.

Rosalynd Harris is a black waitress who happen to serve a table of white Texan men wearing cowboy hats. With only few days after Rosalynd had participated in the Women’s March; the men were in town for Donald Trump’s inauguration….the numbers on the receipt: a $450 tip for a “subtotal” of $72.60. But wait, along with this huge tip, came a note.

The handwritten note read: “We may come from different cultures and may disagree on certain issues, but if everyone would share their smile and kindness like your beautiful smile, our country will come together as one people. Not race. Not gender. Just American. God Bless!” 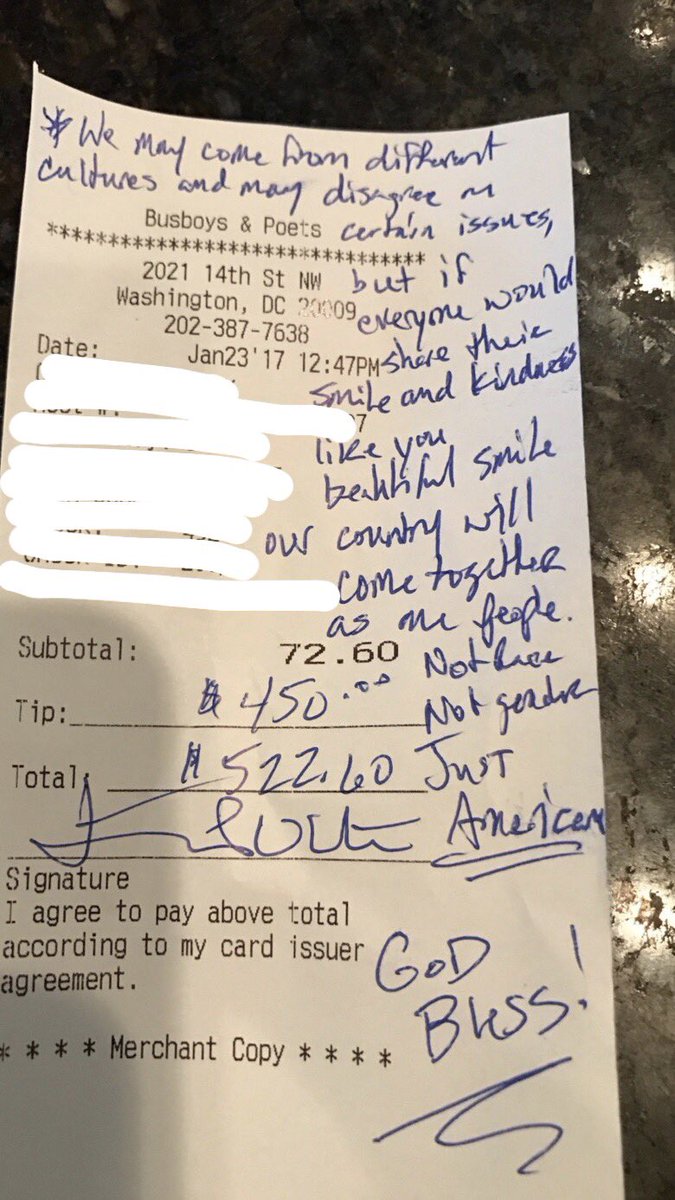 “You automatically assume if someone supports Trump that they have ideas about you,” Rosalyn shared. “But (these men are) more embracing than even some of my more liberal friends, and there was a real authenticity in our exchange. This definitely reshaped my perspective. Republican, Democrat, liberal are all subcategories to what we are experiencing. It instills a lot of hope.”

“We all have the American spirit,” said Jason White, the man who left the tip, “And it’s really our duty to make America great ourselves—not one person. And that’s by respecting and loving one another, no matter how much we disagree with them.”

Rosalynd who is a professional dancer was about to move to a new apartment but she was concerned about being able to pay the initial fees. She shared the tip is “a huge weight off my shoulders.”

This is such a fantastic example of someone embracing the American spirit. There wasn’t any “ha ha you lost” or “Democrats are dumb” talk from these people. They were just happy to have met someone who was kind and pleasant to them, no matter their political affiliation.

We could use some more of their brand of kindness in our world today.