Bill Nye, paragon of scientific thought and rational thinking, has taken it upon himself to save the world, in a Netflix show named, and I’m not kidding, Bill Nye Saves The World.“In this series, Nye snarkily teaches the non-scientific idiots amongst us about things that are totally based in fact and peer-reviewed research, specifically the topic of gender.

Now, for those of you who aren’t exactly in the know of current scientific lingo, gender is a social construct that can change with a person’s mood. In reality, gender was a term coined by a man named John Money, who was so convinced by the concept of fluidity that he performed genital mutilation experiments on infant boys and had their parents raise them as girls. Later in life, they committed suicide, but Money’s term stuck and now it’s being parroted around by the likes of scientific idols such as Nye for political and financial gain.

Nye’s latest clip may be the most ridiculous thing I’ve ever seen, and is the farthest thing from science as you can get without actually trying to demonstrate the flatness of the Earth.

Nye talks about gender being a spectrum, and that conventional science used to think that there were only two binary genders, defined by the sex of a person, before it discovered that apparently science enables you to let your freak flag fly. 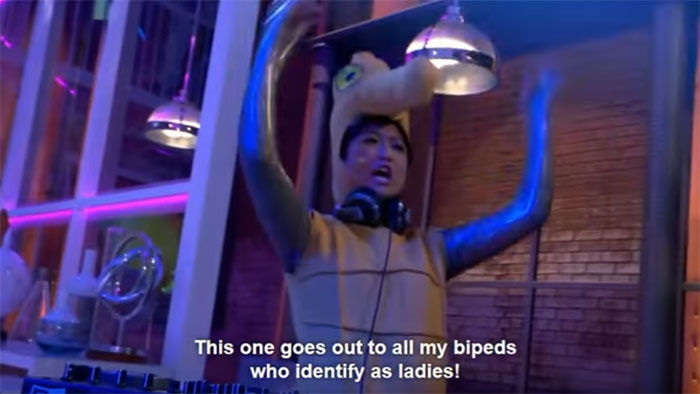 After this, a woman in a seahorse costume tells “bipeds who identify as females” to clap their hands for a woman who raps about her vagina as a bagel with lox, gay sex, and Skyping with sad clowns. I’m not sure what being high is like, but I imagine that this is what the bad part of an acid trip would be. Nothing makes sense and a dread for the future of society takes over.

If you can stomach it, here’s the clip, entitled “My Sex Junk.” Remember, this video is for young teens.

The shining beacon of hope is that the video, at the time of this writing got 338 likes and 20,985 dislikes and counting. The comments also deserve a chuckle. Here’s the top comment on YouTube:

Everything wrong with this video:

Amen. Now I need to go wash out my brain with bleach.