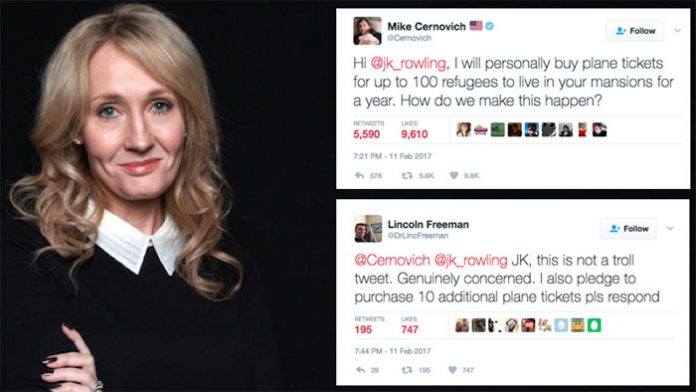 Many former fans of author J.K. Rowling have taken to twitter, offering up thousands of their own dollars to fly Syrian refugees to live in her mansion.

This is a retaliation to her very public judgment of President Trump’s efforts put a hold on refugee entry into the U.S.

She even took a shot at Piers Morgan via Twitter for his support of Trump’s refugee ban.

Yes, watching Piers Morgan being told to fuck off on live TV is *exactly* as satisfying as I'd always imagined. https://t.co/4FII8sYmIt

.@piersmorgan Would you like a couple of hours to mock up some pictures of refugees carrying explosives to substantiate your position? https://t.co/sFj0kqIajd

Rowling has been a huge proponent of everyone, including the UK, taking in more Middle East refugees.  Everyone, except apparently, herself.

Twitter users decided to see if Rowling would be willing to put her money where her mouth is, offering to fund sending thousands of refugees to live in Rowling’s personal residence.

@jk_rowling @piersmorgan How many refugees did you take? You're one of the richest people on earth net worth $1 Billion pic.twitter.com/DaPmeT3wjl

@jk_rowling @piersmorgan invite them to your house, jk, maybe the owl and the wand will protect you.

Even “Gorilla Mindset” author Mike Cernovich got in on the action.

Hi @jk_rowling, I will personally buy plane tickets for up to 100 refugees to live in your mansions for a year. How do we make this happen?

@Cernovich @jk_rowling Lets make it 10,000. I'm sure a whole bunch of us would gladly chip in as well.

@markkayeshow @Cernovich @jk_rowling I am in for a half dozen.. wish I could do more but the Obama economy dealt me a small financial blow!

Rowling has yet to respond to this outpouring of support by loving Americans to further her cause.  It’s hard to imagine though that she will be able to gracefully refuse.